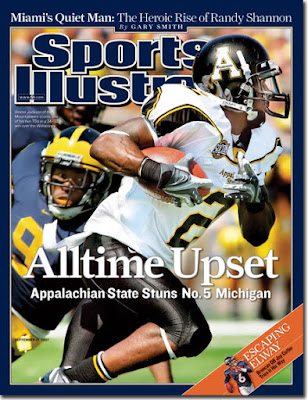 This weekend marks the seventh anniversary of my all-time favorite headline. Not that one. This one:

That's how the Charlotte Observer captured the moment in 2007 when our little Appalachian State football team conquered Michigan.
Sports Illustrated declared it "Alltime Upset" on a cover suitable for framing. But leave it to the old-time headline writers in Charlotte to make it majestic, just for us. Just like local newspapers used to do.
Never has more been said in just 10 counts.
Of course, App-elation! was the way we felt up here in the mountains after the unbelievable drama and the unimaginable triumph. Mary and I held hands as we listened to the final heart-wrenching moments on radio. That's the only time I can ever remember a football game bringing tears to my eyes.
App-elation! declared the seismic shock to the rest of the state in a way that no one could miss nor misunderstand.
App-elation! was also a pun mocking the way the TV announcers mispronounced Appa-latch-un, a Yankee indignity that only heightened our accomplishment.
App-elation! even got the hyphen right, which is more than I can say for Sports Illustrated.
Maybe best of all, App-elation! was a newspaper loosening its necktie and coming down from its ivory tower to join the party—bringing along a 96-point exclamation point just for fun. Newspapers aren't supposed to take sides, which makes it all the more memorable when they do. (Lest we forget, the Detroit Free Press headlined that game APPALLING.)
Appellation, appropriately, means a name, or the act of naming. That's what great headlines do. In moments like these, newspapers write history, the front page becomes a keepsake, and a great headline deserves to be autographed.
Great headlines stick in your mind like a song. The best ones orchestrate multiple messages and nuanced puns.
I wish I had kept a file of the best headlines I've seen over the years. I've been blessed to be there for the birth of a few of them. One moment, a fine bylined story is lying headless on the page. Deadline is only moments away. Then inspiration bursts out of nowhere, sort of like Armanti Edwards, and suddenly an anonymous ink-stained editor has the opportunity to make memories and express history in one-tenth of a tweet.
Here are a few of the finer headlines that I've recently seen or never forgotten.

Shaw, Shank: Redemption
Lots of headlines borrow from movie and book titles. Too often, it's a stretch, like one I wrote about a Georgia comeback: "Dog Day After Swoon." But this headline in The State condensed all the key elements of last year's Missouri-South Carolina football game: a jailbreak performance by wounded quarterback Connor Shaw, a shanked kick that would have won the game for Missouri, and the championship implications for the Gamecocks.

E Pluribus Union
Monte Dutton once wrote an essay for The Greenville News about high school football in Union County, S.C. Two of the county's three schools were state champions, and the third program was on life support. That headline turned prophetic just a few years later when Union, Jonesville, and Lockhart consolidated into one school. Then they truly became the Latin we all know from the penny, E Pluribus Unum—Out of many, one.

The Greenville News immortalized the score of Clemson's tenacious victory against Lawrence Taylor and North Carolina, the pivotal game on the way to the 1981 national championship.
And speaking of LT …

Plunkett Plucks Theismann's Heisman
Thanks to this headline, I remember the results of the Heisman Trophy voting from 1970 better than 2013. I've always attributed this one to Phil Batson at the Anderson Independent, but now that I think about it, in 1970 Phil was probably still down in Due West serving as manager for Red Myers, Elmer "Skip" Goley, and the Erskine College Flying Fleet. (There's some raw material for headlines.)
Phil wrote some fine headlines and talked me into staying in the newspaper business when I was thinking about becoming a computer programmer.
One rule Phil taught me: If it's a good headline, it fits. Rearrange the page if you have to, but always make room for a good headline.
Times sure have changed. No matter how much we pull for the underdogs, newspapers and headline writers have no better chances anymore than Appalachian State does in Saturday's rematch with Michigan. But this remains true:
Good headlines always fit.
They always will.
Posted by Tom Layton at 5:59 PM