There once was a Wobegon headline 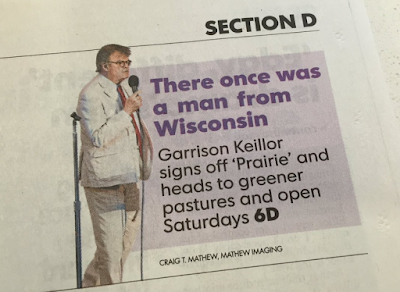 "There once was aman  from Wisconsin"
How does that headline sound to you?
Like the start of a naughty limerick?
Or the unedited demise of a once-trendy newspaper?
Or don't you recognize Garrison Keillor, the unmistakable voice of ... Minnesota?
Not Wisconsin, for heaven's sake.
That's the woe-begotten headline that USA TODAY published last week for a story on Keillor's retirement after 40 years as the host of the public-radio institution, A Prairie Home Companion.
I wish I could give the newspaper credit for attempting a limerick, because Keillor would have appreciated that. In fact, he wrote several limericks specifically for Wisconsin when he performed in the beer town of Milwaukee.


There was a young man who loved Pabst
He drank it until he collapsed
He gave up beer
For Lent every year
And on Easter morning, relapsed.

On his farewell broadcast this past Saturday night, Keillor recited or referenced several limericks, including bawdy verses about men from from Pocatello, Antietam, and Nantucket. This one even had an autobiographical first line:

There is an old man of St. Paul.
Put his desk in a toilet stall.
It was quiet, conducive,
And one had the use of
The plumbing with no wait at all.

Even at age 73, Keillor still has a boyish love for limericks. "I intended to be a serious poet," he confessed in his final Lake Wobegon monologue. "Instead, I was fascinated by the limerick."
I felt much the same way about my old medium—newspapers. And after I heard Keillor's farewell show and saw that headline, it got my my words pumping:

Back in the newspapers' heydey,
One called itself USA TODAY.
The going got tough,
Proofreaders laid off.
Wisconsin looks like Minnesotay.

I feel entitled to pick on USA TODAY because I was associated with the McPaper from its revolutionary beginnings in 1982. They gave me one of most obscure jobs in journalism—contributing the daily sports item from South Carolina for the old Around the USA page. I earned $5 per item, and as I recall, those words were edited and cross-checked relentlessly. That's what newspapers did in the days of yore, when folks up and down the street were willing to pay for home delivery—twice a day, mind you—and newspapers found value in employing copy editors and proofreaders.
Those were the good old days. In the 1980s (about the same time that Keillor made the cover of TIME magazine) The Greenville News was so ambitious we thought we could take over the state of South Carolina. If we could gain a few thousand readers and establish a semblance of a statewide audience, maybe we could pry the lucrative legal advertisements away from the Columbia paper.
As part of this campaign, I was given a wonderful opportunity—not to mention a bottomless budget—to expand our high school football coverage statewide and cultivate a border-to-border audience. We catered barbecue for thousands of coaches every year and published special editions that were over a hundred pages. On the eighth Friday night of the 1984 season, we succeeded in getting every score of every game in the entire state in our first edition, which we felt certain had never been accomplished before. And for the next eight years, we never went to press without every score. We had radio ads bragging about it.
If a coach didn't call in his game—and why wouldn't he, since we offered him $10 to dial us toll-free?—then we would make the midnight call to his house or the firehouse or the Waffle House to hunt down the score.


There once was a coach in St. Matthews.
Who'd rip out the phone if his boys lose.
So we'd call the town cop
Or the local truck stop
Where the quarterback gets his tattoos.

In a different era and a different state, Keillor might have been the one calling in the game for us. One of the revelations I discovered in all the tributes published last week was that he, like me, began his career as a junior-high sportswriter. When a San Francisco reporter asked him about the happiest memory from his youth, he said:


"The happiest was when I went out for football in the eighth grade and I took a physical, and the doctor told me I couldn’t play because I had a click in the valve of my heart. I was shocked, but I took this experience as a cue that I have to do something else that was brave, and I went to the local paper and asked if they needed someone to write up sports, knowing they didn’t have anybody. So they let me do it. So instead of sitting on the bench, I sat at the top of stands in the press box with men from the local radio station who were broadcasting the game. I sat with a tablet and a pencil and felt like royalty up there. I was a writer!"