Where butterflies come from

Each year about this time, a friend brings me a monarch chrysalis attached to a wooden stem. Unless I mess it up, I get to witness a biological miracle.
Leading entomologist Dr. Lincoln Brower uses that very term—"biological miracle"—to describe where butterflies come from. Whether you profess evolution or creation, either way it takes lot of faith to explain it.
If this is evolution, I nominate the monarch butterfly as the most highly evolved species on the planet.
If this is creation, God is giving us a glimpse of his majesty and his imagination—not to mention a profound illustration of the new birth that Jesus promises.
Forgive me if I'm acting like a starstruck kid in the presence of royalty, but here are a few things a monarch butterfly can do better than you:

Fountain of Youth
There are usually four generations of monarch butterflies each year. The first three live about 6-8 weeks from the time they hatch as caterpillars. Those born this time of the year live 6-8 months—four times longer than their parents and four times longer than their children.
If you’re looking for the fountain of youth, follow a September monarch—and be sure to drink your milkweed!

Parading to Mexico
Like so many of my Boone neighbors, my monarch is a snowbird who will soon be heading south. He (or she—we’ll know by the dots on the hind wings) will return to the very same pine grove in Mexico where great-great-granddaddy spent last winter. My monarch has never met his parents or grandparents, who never had the urge to fly south anyway, but he inherently knows the way. Next spring, he might make it as far north as Texas before becoming a daddy and finally dying off. Succeeding generations will complete the migration.
One of the best places to watch the southbound migration is on the Blue Ridge Parkway where U.S. 276 crosses between Brevard and Waynesville, NC. The higher mountains funnel thousands of monarchs through Wagon Road Gap and Tunnel Gap in the last two weeks of September. 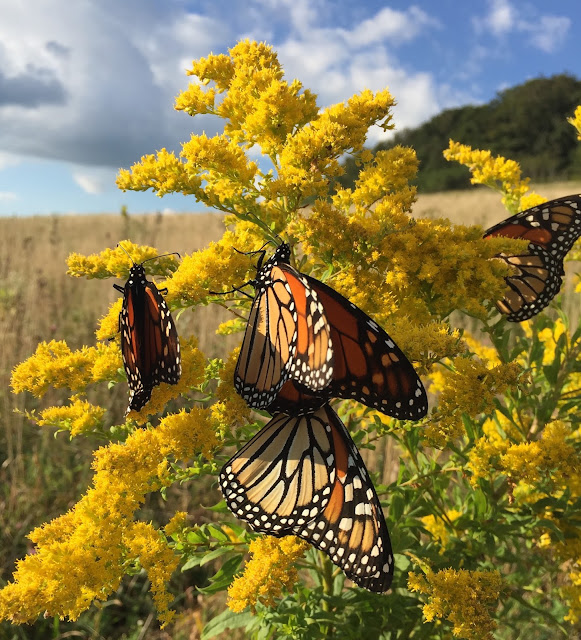 Open fields near the Blue Ridge are great for monarch-watching in mid-September.
I met these in 2017 in the meadow at Moses Cone Memorial Park near Blowing Rock, N.C.

Defying Gravity
Sam Snead once described a perfect golf shot landing so softly that it was “like a butterfly with sore feet.” In reality, gravity barely has a hold on these creatures. A typical monarch weighs about half a gram. A thousand monarchs weigh about one pound. Yet those born this September have the stamina to fly up to 3,000 miles on their migration to Mexico. That’s 3 million miles per pound.
A pound-for-pound comparison may be absurd, but for a 125-pound runner to match a monarch butterfly, she’d have to jog 375 million miles, migrating to the outer limits of the solar system—and then give birth to babies whose grandchildren could find their way back on their own.

Turning a Ford into a Learjet
None of the aforementioned wonders compare to the metamorphosis happening right now inside the golden-beaded green chrysalis. A monarch caterpillar doesn’t just crawl inside a homespun shell and grow wings. It quickly dissolves into a green soup that Dr. Brower describes as a “rich fluid media” and then reconstitutes itself as an entirely different creature.
I’ll let Dr. Brower explain: “Nothing like this happens in vertebrates—ever. It's a phenomenon of insects and it truly is a miraculous biological process of transformation … Literally the entire internal contents of the caterpillar—the muscles, the entire digestive system, even the heart, even the nervous system—is totally rebuilt. It's like you took a Ford into the shop and left it there for a week and it came out as a Cadillac.”
I thought he was going to say it came out as a Learjet—which happens to have about the same flight range as a monarch butterfly.
Dr. Brower also notes how the monarch “changes its ecological niche entirely when it transforms from a caterpillar to an adult butterfly. They are two ecologically different organisms, as distinct as a field mouse and a hummingbird."

All hail the king of the butterflies!